Taken together like this, they seem completely incompatible. But in the world of Jet De Kort, everything falls into place. So silently and perfectly, her works seem to generate a new vibration. A space that you enter hesitantly, because you know that only in utter silence and motionlessness will you understand what is going on.

And then it happens. Sudden connections, like a silent chain reaction, slight sparks of mutual understanding between the various visual elements, a back and forth of meanings that do not necessarily have to arrive somewhere. Should you feel uneasy if you don’t know how to read the story right away? Not at all. Because telling a story with the intelligibility of words is not Jet De Kort’s intention.

In this gifted, plastic thinking, the image frees itself from its classical meaning by abstraction. The result is a fascinating ambiguity, but also an openness, a playful invitation to the viewer to wander mentally through these scenographies and, above all, to invent his own storyline. In all their modest refinement, Jet De Kort’s spaces are rich pools of meaning from which the viewer can draw at will. She does not direct, she only offers generously, the multi-interpretable as a gift for the attentive observer.

Jet De Kort herself calls these delicate sculptural spaces ‘snapshots’. Stills of a possible life. We read a great vulnerability, installations that are as fragile as life itself. Forms that are intrusive and invasive, like it or not. A frantic search for shelter and protection too. Holding back and allowing in, often all in one image. The awareness of our ultra-brooding existence, the knowledge that nothing today offers certainty for tomorrow, and the transgression of every boundary, are all reflected again and again. Jet De Kort offers welcome islands of meditation, silently instructing us about life.

Fascinated by the way we construct the world around us and what life this world comprises, I have created sculptural spaces since 2015. They consist of lines, voids and objects. The contact between them and the relationship with the space is a focal point. The meaning of the line is partly determined by what happens around it. When its function as a boundary line is breached, the boundary ceases to exist.

Objects almost exist as traces of human activity. They provide line and space with a possible associative function, they disclose an absent action. The void can conjure the image of a spot, a residence, a room or a body, thus referring to a physical, an architectural or a scenic context. I am fascinated by its aspect of temporariness, fragility, volatility.

From the relationship between object and line, a few works created the representation of a moment. The still image (characteristic of sculpture) appealed to movement. The object as the cause of movement became the reason for sculptural actions in a photographic presentation.

I have been exploring the relationship between sculpture and pedestal for some time. Other functions had already taken over the supporting role of the pedestal. The moment my hand began to exist as a pedestal (“Uplifting”, 2020) the photographic image entered my work, allowing the traditional role of the pedestal to change further.

The poetic expression of Arte Povera and its playful use of materials appealed to my interest in sculptural actions with objects as traces of human presence. The object provokes the liveliness of the body and therefore gives us a different view of ourselves. Worthless materials that I find in my everyday surroundings merge with cultural-historical materials.

Series such as “You Look Like Me” and “She Was Here” incorporate objects. The images evoke qualities of older art forms such as painting, architecture and drawing, merging the playful with the serious.

The body acts as a sculptural element that establishes connections. “The body as a bearer of being-in-the-world. To have a body is to connect with a well-defined environment, to become one with certain projects.” Merleau-Ponty, Phénoménologie de la perception, 1945

2002 – “Shortcut”: Puurs park
Present: a hiker’s trail carved out spontaneously by the park’s visitors.
Material: gravel
Positionering: two lines are laid out as an architectural drawing, as fundaments on both sides of the trail.
Exposition: “Fieldwork & Sculpture”
Curator: Francis Van Hoof Gallery, Puurs

1999 – “Tell Me A Story” : Carrara, Italy.
Present: In a village near Carrara there was a vacant lot with an old table in one of its rooms. On one side of this room there was a double window. The village lies in a basin between hills. There were still a lot of TV antennas on the roofs.
Material: a marble statue with a rubber line lying as a transmitter device on the table.
Photographs: a similar transmitter device photographed in a Flemish landscape.
Exposition: “Notte e Giorno”
Curator: studio SGF scultura

1990 – “Tombe – Tempo” : Castle of Halle-Zoersel domain
Present: a crossing of two hiker’s trails
Material: blocks of peat stacked against a wooden frame. Newspapers were pasted randomly against the inner walls as a reference to ancient Egyptian writing. Centrally inside a square has been cut out through which rain, wind and leaves can come in. Outside four oxygen cilinders have been positioned.
Positioning: The art piece has been placed centrally on the trails’ crossing, causing the trails to run through it.
Exposition: “Zoersel ’90”
Curator: Bart De Baere, directeur Muhka
Quote:
“Tombe – Tempo” overarches a four-armed trail in the woods. Blocks of peat have been stacked against a wooden frame establishing a relation between the living forest and the past. Inside the “mastaba” the present is focused on. Newspapers have been pasted randomly agains the inner walls and are a reference to the more consistent writing of ancient Egypt.”
Luuk Rademakers, 1990 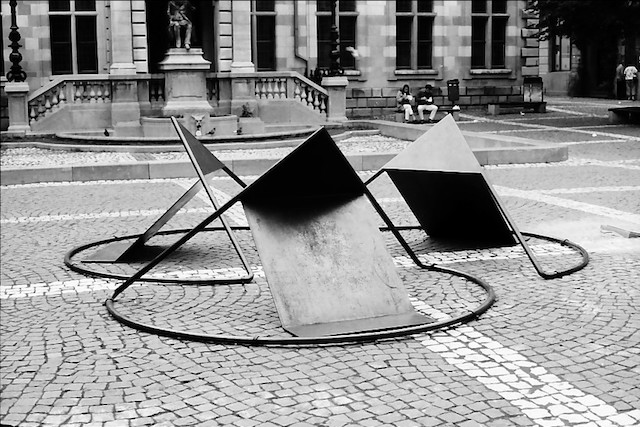 1987 – “Confrontation” : Conscience Square, Antwerpen
Present: crossing of lines on the square.
Material: three identical metal statues
Positioning: statues placed like concentric circles, shadows change in time.
Exposition: “Monumenta” – Beeld in de Stad (Statue in the City), 19de Biënnal Middelheim Museum, Antwerpen
Curator: Menno Meewis, former director of the Middelheim Museum.
Quote:
“The installation is in a relationship with its environment. It renders an image of the city at its origins. An intimacy, a dialogue is established between the three elements. One can enter the piece of art. Man is placed central between the three constructions which have been placed correctly while influencing and complementing one another. The image of shadow introduces time: the metal plates which have been placed in a sloping way register the Sun’s orbit in their own manner.”
Luuk Rademakers, 1990